I know I keep saying I must write more - and I am thinking about the writing MEME I snagged last week.  So, in to help with my plot ... and to help all of my f-list who write, I wanted to share this brilliant list that I snagged from

Rules for Writing a Fantasy/SciFi Novel/Movie/Show :-

1. The heroes will lose every battle, but win the war.

2. It will only rain when the heroes are exhausted and running out of food.

3. The heroes will only have horses if they are going to climb a mountain, where they won't be able to ride the horses anyway.

4. The enemies will be killed by the slightest mishap, but the heroes will live through anything.

5. The hero and heroine will fall in love on the last three pages.

6. Magic (if available) will be used intelligently by the heroes, but will be wasted by the enemies.

7. You will annoy the reader by placing numerous re-hashings of prior events in the first four chapters of the second and following books of a series.

8. Start off occasional chapters with a description of one of the main characters engaged in some activity, without using their name. The reader will feel exceptionally smart when they figure out who it is before you reveal it.

9. Racial prejudices will be ignored by the heroes, but will be a factor in the downfall of the enemy.

10. The enemy will be able to predict all of the heroes actions, but will be powerless to stop them; the heroes will foil all of the enemies plans through sheer dumb luck.

11. The heroes will be able to survive for weeks without feeling the call of nature, unless they are in a cell.

12. Should the heroes be captured, the enemy will gloat and reveal all of their plans.

13. Should the heroes be captured, they will be kept in a small cell with a bit of straw but no windows, and will only be fed bread and water at irregular intervals. Despite this, they will be able to tell how much time has passed.

14. Magic swords do not glow except when the heroes have no other source of light, or if it is dark, and they need to be captured for the plot to advance properly.

15. The heroes, after making a noise when trying to remain silent, will stand perfectly still for several minutes. The enemy will not, however, have heard it. (Alternate scenario: the enemy will hear it and search the area immediately (rather than guessing the action of the heroes, and waiting for them to move again, thereby giving themselves away). The heroes will quickly hide, their sounds masked by the noise of the enemy's search.)

16. Only describe a monster you have created once; call it by name any other time it appears, even if the character it is spotted by did not see it the first time or have it described since.

17. At least one of the heroes will be the second best in the world at something. The only person better will be one of the enemy, but they will nonetheless be defeated by the hero at the climax.

18. Everyone in a position of power is corrupt, and is subject to bribes.

19. Rulers of any large territory (eg. Kings, Emporers, etc.) are either terminally stupid or insane, and could not suppress a rebellion if their life depended on it (which it usually does).

This morning I wasn't working, so rather than looking into typing up my CV, I decided it was too good a day to not have a walk and enjoy Bude ... pic scam to come!

However I am postng this seperately as it is an unusual geological feature that is on one of the beaches in Bude ... people studying such things do visit the town just to see it - so I have saved you all a trip! 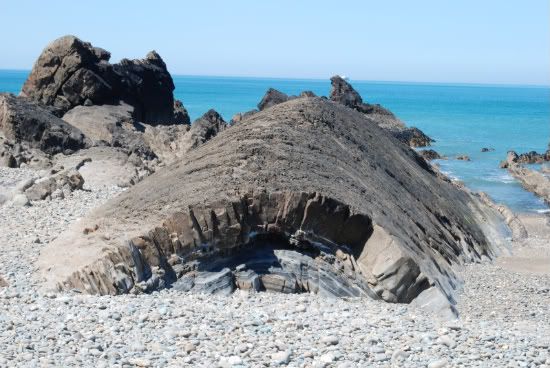 angearia  - Hope that you are having a great day, and that this coming year will see your dreams coming true. Well, I did warn you that I had been out and about with the camera! Behind the cut are some general panoramic views ob Bude and the north Cornwall coastline, showing wheat a calm sea looks like here.

I haven't reduced the size this time, so if you are on dial-up ... beware!