Just a couple of pictures of James acting - mostly I was so enjoying the scenes I din't take photographs! 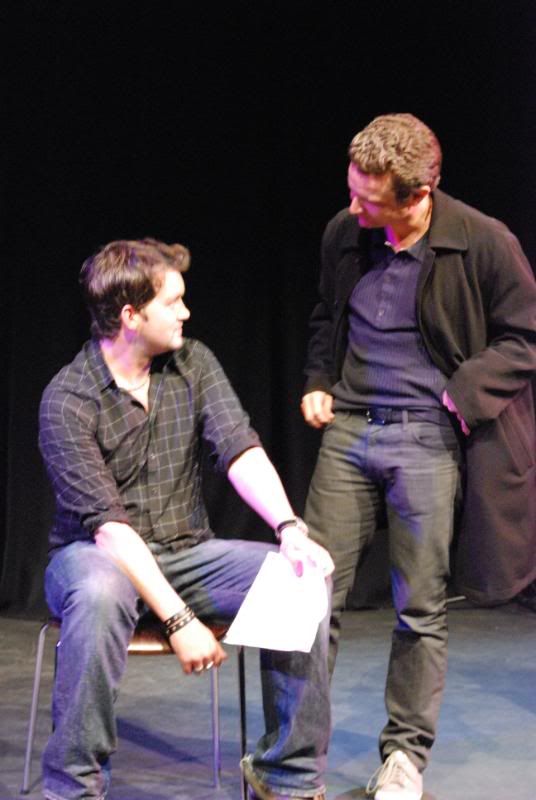 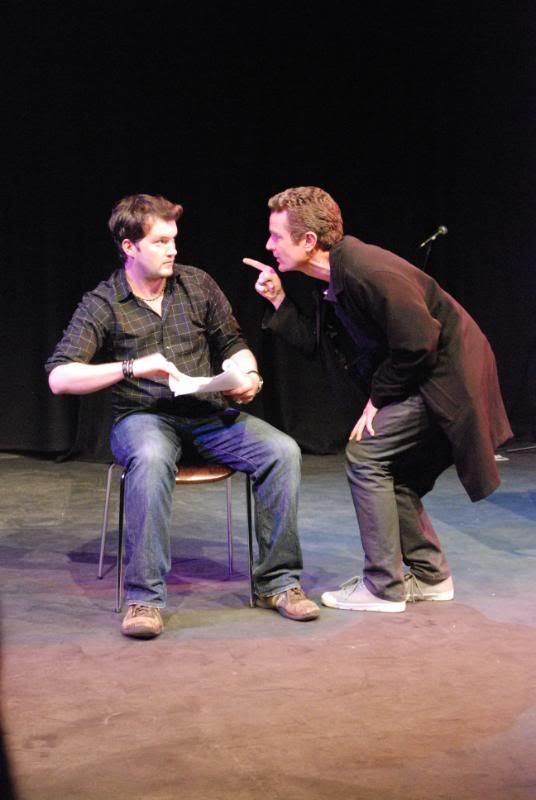 AND NOW MEN CAN'T SAY THAT THEY CANT MULTI-TASK!!!


The next section of the day was taken up with autographs.  Each of us had one personalised one, and then could purchase others.  I decided to get a picture that I had taken of James last year at Union Chapel signed, and my personalised photo was the one that I had taken with him last year at Collectomania (the lower one of the icons on my side-bar of my journal).  He never does the personalised ones, so wanted to have one of him and me together.   The pictures were both copies that I printed out, as I like to keep the originals!

We all had our names written on post-its by JMLive people, and then joined the queue in row order.  Most of us had brought an assortment of things for him to sign - and a percentage had also brought gifts for him, as well.

As with the rest of the day, things were well organised, and everyone was friendly as we made our way to the table, and our turn of a minute talking to James.

This is where I yet again have to say how much I admire him - he was signing (not just his name this time) on our items .... getting all our names copied correctly - while still chatting to us about an assortment of subjects.  he commented on both my photos, and we talked about the concert of the previous evening ... and so I was pleased to be able to Thank Him, both for a brilliant time, but that he had sung London City.

All too soon it was the next persons turn.

People ask why I like the guy - it is this aspect of him that shows how lovely he is - he shakes hands with us, looks us in the eye, answers questions ... actually converses with us ... while still getting the autographs one in a neat and even fashion, on the clearest part of the item that he can.

Below the cut are 5 pictures of him with others in the line - trying to show how he spends time with each of us.

While the signings were on, I was able to take some of these pictures, as well as chatting to a few friends - Catherine (who I had met last night) introduced me to

redandglenda  and I also (at long last) got to meet

Below the cut are some of the photogarphs that I took at the Q&A.

Hopefully I have selected some that describe the Jmaes we all love.

It's as I start to type this section up I wish I had a better memory!

James had an assortment of questions asked him, fromShakespeare, to his childhood dreams and when he had started going commando!

He reminded us, again, that Shakespeare needs to be seen and not read.  They are great as plays, but not good to study, if that's all we do.  He answered (again) about his Picollo make-up, and said that his girlfriend had hated him in it, and that in the film, his son thought he "didn't suck" .... These were 2 of his ambitions when he started.  (He talked again of the age changes that had been made to scren the film).

When asked about theatre he was quick to jump in and disagree with what the questioner was saying, and reminded us that he loved theatre work.  He did think he had already had his special time when he had run a theatre company in Seatle, but would like to do so again.

We again were told his Spike story ... and that was as he was asked about writing for comics.  I suppose he thinks if he won't get to act Spike's story, so he would then write it.

I think, overall, there was a good selection of questions - and some great answers.  I should have made a note of them, or maybe just taken less photos!  (If you missed those, they were in my previous post)

All too soon the afternoon was finishing.  It had basically stuck to time, and James had been truly amazing .... As you may have already gathered, it was a special time for me!

We had about an hours gap, so I went and had a sandwich with

redandglenda  and Catherine ... a great excuse to chat "James" as well!


I was just so lucky to have the seat that I had - I felt that most of the time he was singing towards me!  It was a great atmosphere beforehand - I met up with Karen and her friend (that I had queued with the previous day) and they asked how the afternoon had gone.  So great to be able to babble about the fog I was living in!!!

What was lovely was that he had no support act - so Steve just introduced the evening - then it was all James!

As I did with yesterdays report, there are a few notes of the songs behind the cut.  Some were the same, so I may end up saying similar!!

Before I do some more James, I must get this MEME done!

I am not a keen gardener., but I bought a selection of bedding plants today on my way back from riding, and stuck them in the garden, while cooking dinner!

Yes, DJ knows a Wednesday - however giddy I am feeling!

I got there early-ish, as I know his coat still needs sorting - and wanted to show Toni my pictures!!!!!!!  As it worked out, I was able to give DJ a good groom - after I had located him in his foggy field.  He is a grey - so thinks foggy days are great - I won't be able to find him.  Still, if I can't find him, then neither can his carrot!!

Toni came into the stables, without horse, to say she wouldn't be riding - her husband had spent 24 hours in hospital, while I was squeeeeeing in London, with heart problems.  He seems OK now, but he did have a heart attack back in 2003, so can't take risks.  Toni was looking very drained, so was giving herself a day at home, catching up ... and keeping an eye on her husband.

We didn't go far, as the visibility was not great  Any worse, and I wouldn't have gone out - there is only so much risk I will put DJ in.  We walked and trotted (and chatted) round the block.

So, as it was short, once back, I could feed DJ and take him staright out to his field again.

For the sake of my friends, I have had to suffer looking through and deciding which of my photographs I should post. 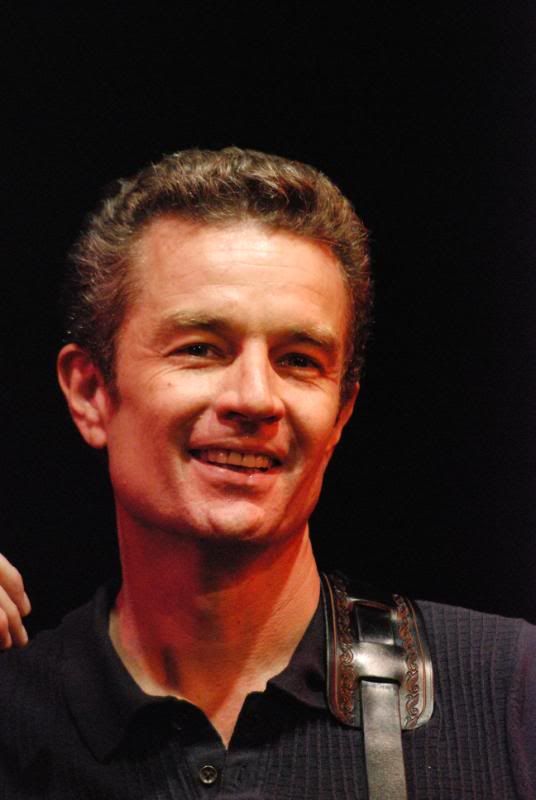 It's a hard job, but someone has to do it!

Just a brief note really - I'm almost done, only my journey home to go.   However, did want to post about this, as I knew it would make some of you laugh - but didn't want to add it to the concert write-up!

When I got back to Picadilly on saturday night, I had to re-book in, which didn't turn out to be a hassle, in the end!  I then decided to change my shoes and go for a walk around Picadilly Circus and just let the day soak into me.

So, I took off my sandles, felt sore on my left foot, so presumed I had rubbed a blister (even though the shoes weren't new) ... I looked down, to see I'm standing in a puddle of blood.  Mentally had a moan about the cleanliness of the room, stepped back, to see more blood ... yes, I had managed to take a huge chunk out of the side of my toe that evening!

I always said I would do anything for James - but hadn't expected it to mean me shedding blood for him ... Thank goodness for JamesFog - not much pain!!!!!

And then people wonder where I get my username of Debris from!