I really hope that you are having a good day, and get back to us all on LJ soon.

Most professions have to do C.P.D. now (Continued Professional Developement).

As a registered osteopath, I have to do 30 hours per year - 15 of which have to be studying with others. Here I am trying to get the paperwork together to add up how many hours I have done, as my year ends on the 28th. 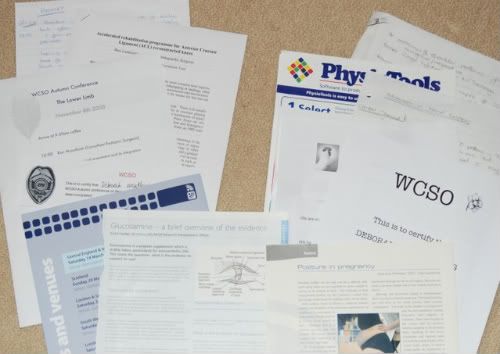 Sorry to say, but I am mad enough to have signed up again - I just have to start thinking as to what I am going to write!!!

The information is here if you haven't already seen it.

While Toni is away, I am helping with the horse sitting, so as I arrived today 4 heads looked up hopefully .... DJ kept his head down and pretended he hadn't seen me!!!

Anyway, as Conrad started walking towards me, DJ then decided that if there was a carrot, it belonged to him ... so he trotted over in the hope of getting to me first!

Yes, he had his carrot, and then walked to his box, where he had a handfull of hay waiting for him.

As he finished that I started grooming - I had just lifted up one of his feet, when 2 dogs up the road decided to have an argument, and not to be out-done, Kai (who was in the opposite stable to DJ) decided to join in!  To say it suprised poor DJ is a bit of an understatement!

Still, got him calmed - and groomed, and ready, in time to leave just before 10 am.

We walked up to Ros, to meet her, and another new horse, a gelding this time - but yet again withpout a name.

He is young, so we were only going up to the farm and back, and I think DJ realised that he was the boss - as he was such a good boy.  There was a lot of traffic today, but it all slowed down for us so that was good.

Once back, I fed DJ and took him out to his field - then fed Badger, Junior and Smudge; and took hay out to all 5 horses.

Then it was time to set off home - stopping for milk on the way.  Sadly I put the alarm on and forgot that with Kai in the front seat he would set off the sensors ... Yes, I came out the shop to hear a car alarm going off - mine!!!  OOOppps!!

Still he accepted a cuddle and an apology (that's if he could still hear what I said!)
Collapse