As I continue my trip around England in my book "I never knew that about England" I move North-East to the County of Cheshire.

This is a county that I have visited numerous times - but not since I was 6, so have very few personal memories.  When I was 3 months old my parents moved from Essex to North Wales - and we lived just over the border in the town of Fflint.  Chester was the town that Mum and Dad used to go to do do a days shopping.

So - here is a bit about a County I do know, but can't remember!

Chester is the County town of Cheshire and is an old Roman town.

Chester's racecourse is built on the site of the Roman wharves and is Britain's oldest sporting venue, having had race meetings here since 1540.

The shopping centre of Chester dates to the 14th Century and is called The Rows.  It has 2 tiers of shops. 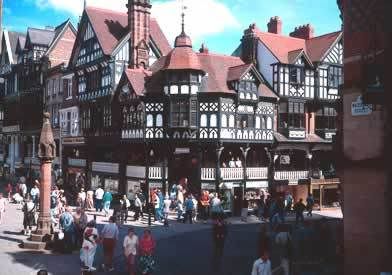 The Grosvenor Bridge across The Dee in Chester was, in 1832, the biggest stone pan on a bridge at the time, being 200 feet across.  The first person to officially cross it was the then Princess (later Queen) Victoria.  Near the bridge is the Overleigh Cemetery where is buried Edward Langtry, husband of Lily Langtry, the favourite mistress of King Edward VII (She is buried in Jersey)

ever wondered who coined the phrase "Women and Children first".  Birkenhead used to be a small village and then in 1824 William Laird set up his shipbuilding company here.  Cammell Laird quickly grew into one of the biggest yards in the world.
In 1845 the "HMS Birkenhead" was launched, being one of the first iron-hulled warships built.  In 1852 it sailed for The Frontier War in South Africa, carrying 638 people including 13 children and 7 women.  It foundered in a sudden storm while rounding the Cape of Good Hope.  The soldiers made sure that the women and children were put into the remaining life-boats before attempting to save the boat itself.  As the ship started to go down the soldiers were ordered to "stand fast" rather than swamp the lifeboats - 445 men perished, apparantly without a sound being uttered, but none of the women and children were lost.

It is a large village and the birthplace of George Mallory, who was born here in 1886.  He gained his head for heights by regularily scaling the Church tower, and wanted to climb Mount Everest which was, as yet, unconquered.  When asked why he wanted to do it he answered "Because it's there"  He made his 3rd attempt in 1924 leaving camp with his companion Sandy Irvine, at 23,100 ft on the 6th June.  They were spotted 2 days later as 2 black spots on the final summit pyramid, when they were suddenly engulfed by a snow squall and were never seen again.  Did they reach the top?  Mallory's body was found in 1999, but the camera he had with him was not found.
George Mallory's grandson reached the summit in 1995.

Opposite the ICI works at Winnington stands the first boat lift in the world.  It was built tin 1875,to allow passage between the River weaver and the Trent and Mersey Canals.  It raises boats the required 50 ft (15m) and has been restored recently to full working order.

Salt has been mined in this area since Roman times.  It was discovered to be a great flavouring and preservative - and became worth it's weight in gold.  We get the word "Salary" from the Roman word "sal" which means salt.  One of the largest mines had a pit 360ft deep and covered 35 acres.

Sadly the town is now suffering the side-effects of the mining, as the mine shafts were held up by the remaining pillars of salt; and building have toppled into the ground.

Daresbury, near Runcorn is where Lewis Carroll was born in 1832, where his father was the vicar.

It is a tiny village SW of Chester.  Aldous Huxley's family lived in the moated Jacobean Hall; and his grandfather coined the phrase "Agnostic".

Emma Lyon was born in Swann Cottage in 1765 - she later became Lady Hamilton.