This coming month is the sad anniversary of the start of the First World War.  I had a great Uncle and one of my Grandfathers serve in France (in fact Granddad went over on day 1 of the Battle of the Somme).

The Royal British Legion are hoping that everyone will get involved in a UK-wide event, LIGHTS OUT is an invitation to everyone to turn off their lights from 10pm to 11pm on 4 August, leaving on a single light or candle for a shared moment of reflection. LIGHTS OUT will be one of the largest mass participation events of its kind ever seen in the UK, and will complement a candlelit service held at Westminster Abbey on 4 August 2014. 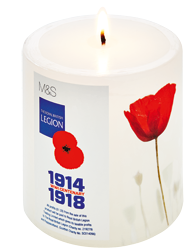 At the going down of the sun,
And in the morning
We will remember them.
Tags: remembrance, war, ww1
Subscribe